Hello! This is my blog for the stuff I have encountered out exploring the fields and hills of Great Britain.

As part of my work at Oxford Archaeology North I’ve recently been practicing (under supervision) flying and surveying with our UAV drones at various archaeological sites in the region. This is in advance of qualifying for a BNUC-S™ pilot qualification to get a Permission for Aerial Work for undertaking commercial projects.

The end of September saw community excavations undertaken at Quay Meadow, in Lancaster. It is located north-west of the Roman fort which is partially extant within Vicarage Fields, and is just below Lancaster Castle. The excavations were undertaken by Lancaster and District Heritage Group in tandem with a wider project aimed at trying to understand the heritage and archaeology of the area which is conducted by Beyond the Castle. 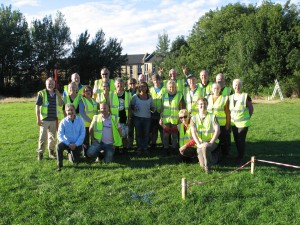 The three excavated trenches were located over interesting anomalies identified in an earlier geophysical survey of Quay Meadow previously undertaken by OANorth. The preliminary results of the excavations suggest evidence for a Roman road heading down towards the original Roman quayside, and what was initially identified as possibly being a post-medieval/modern structure in the geophysics actually turned out to be wall foundations of several Roman buildings found just below the topsoil. There is clearly much much more that Lancaster and District Heritage Group can get their teeth into in future years. 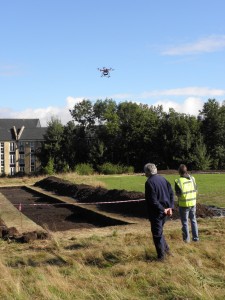 In practice the UAV survey was relatively simple for this site as all we wanted was a general plan view of all of the trenches and detailed post-excavation surveys of each individual trench, which we then created from the photogrammetry in Agisoft PhotoScan. We also created contours of the surrounding topography but this was not as spectacular as earlier results undertaken on the earthworks in Vicarage Fields to the south-east of the site. 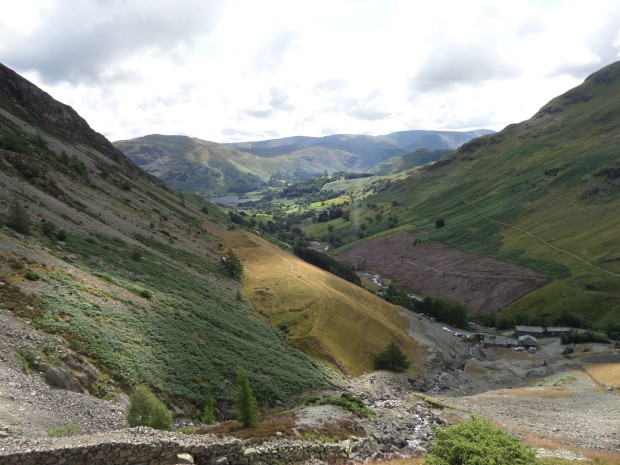 At the end of July we were commissioned by the Lake District National Park Authority to undertake topographic survey of the three large spoil tips at the extensive Greenside lead mining complex near Ullswater in the Lake District. Archaeologically the site is of national importance and is protected as a Scheduled Monument. Future management of the property necessitated the present detailed topographic survey in advance of engineering works to maintain the stability and structural integrity of the large spoil tips. The buildings beneath the spoil tips are currently used as hostel accommodation.

Normally such a detailed survey, requiring close contours for the extensive complex would take an inordinate amount of time to survey using traditional survey techniques such as Total Station or even differential GPS.  Over the last few years we have been developing more rapid and cost-effective survey capability using various unmanned aerial vehicles (UAV) to photograph archaeological sites, which is combined with Agisoft software to create 3D models and contours of sites.

Part of the site was surveyed and excavated in 2003-4 in advance to engineering works on Spoil Tip 2 using traditional survey methods, but whilst that took a week or so to undertake the present UAV survey took a day of flying and setting in survey control to cover the entire mine complex. 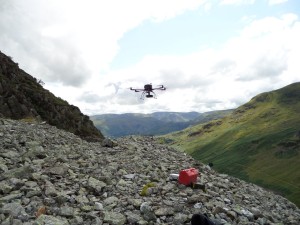 Surveying at Greenside Lead Mines with our hexacopter UAV

The site was visualised in Agisoft as a digital terrain model in both solid form and also with the aerial photography draped over the top. The data from this model was used to create detailed contours of the earthworks at various scales which could then be used when drawing up the site. 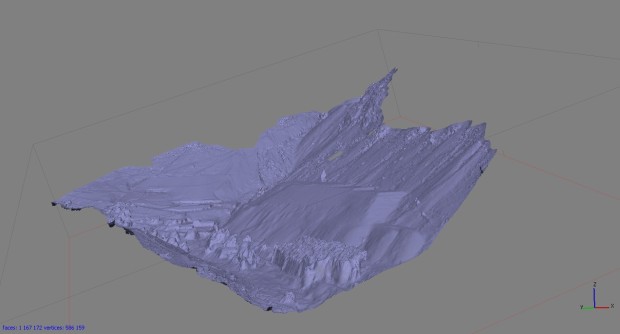 The complete site was also output as a single flattened scaled composite image which was then annotated in the field to add in the finer detail of archaeological structures and provide hatchures to the topographic survey. 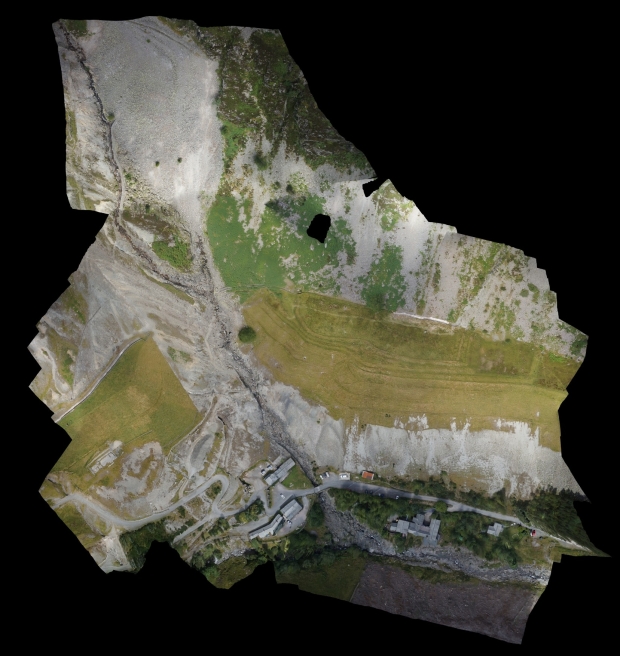 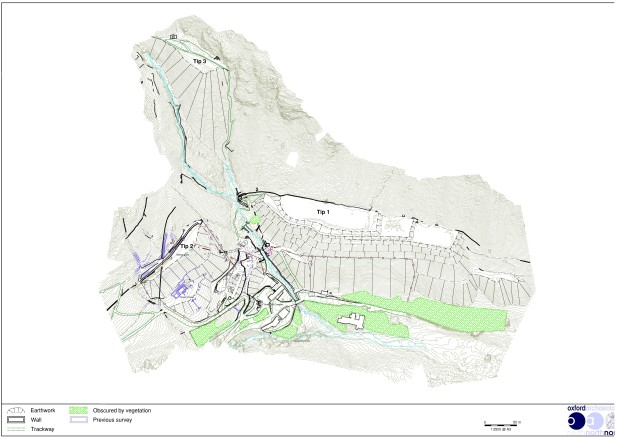 Jamie returned to Blelham Tarn last weekend to undertake aerial survey on the site of the bloomery as no excavation was taking place. He used his octocopter, one of two  UAV we have at the company, to take multiple vertical images across the site. The north-western half of the site was covered in trees but the main area of the bloomery mound/platform where the four trenches were opened up was surveyed in full. From the photographs taken we were able to process them in Agisoft to create three outputs which will be really useful in trying to get an understanding of the subtle topography and earthworks for this site. First we have a flattened aerial plan view of the visible parts of the site which can be overlain on the survey data I took last week.

An oblique view of the 3D model of Blelham Tarn bloomery

Then we have the 3D contour model of the detailed topography of the site which we can spin around, zoom in and out of, and pick up fine detail from. The screenshot above shows the model with the photo layer draped on, the one below shows it as the solid 3D generated model. Again from these we can pick up subtle details of the site and surrounding topography, and also see the trenches, spoil heaps and turf stacks! 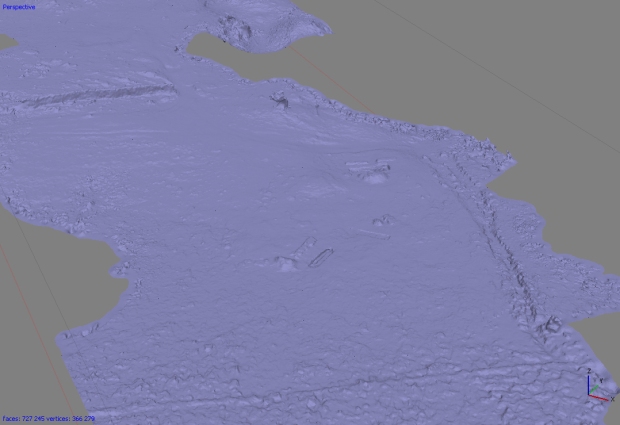 Finally we can create close contours from the 3D model (these here are at 10cm intervals) which are overlain on the rough survey data we took last week – open the image below and zoom it to have a look. We found that the contours were very detailed for this particular site and were (obviously) better than ones generated from LiDAR data for the region, which at 1m accuracy really didn’t show much of the earthworks themselves, and were also offset slightly from the survey data. We have found that the Agisoft contours are better at depicting earthworks of discrete complex sites, whereas the LiDAR contours at 1m resolution are fine for broader areas and showing the surrounding natural topography. 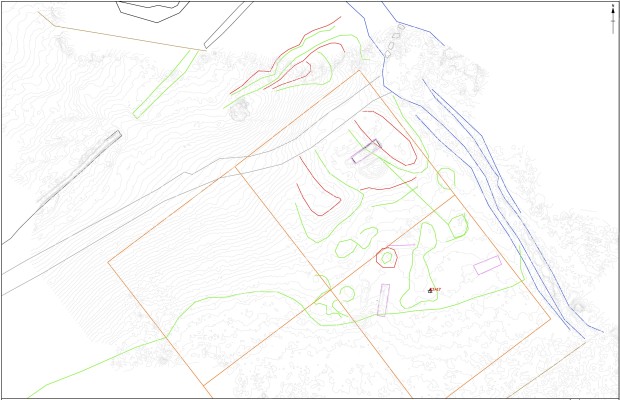 I will use all of this information tomorrow when we go back out to site with the volunteers to finish off and do annotated hatchure drawings of the bloomery.

Aerial view of the cairnfield and linear boundary at Eden House

This time last year we battled through the snow and ice on our journey over to survey a small cairnfield located on the North York Moors near Whitby. The report for this particular project has just been posted online to the OA Library and you can download it here. Did it really snow so late last year? I just can’t contemplate anything other than rain rain rain at the moment, but luckily (and selfishly) I’m still indoors writing up reports. 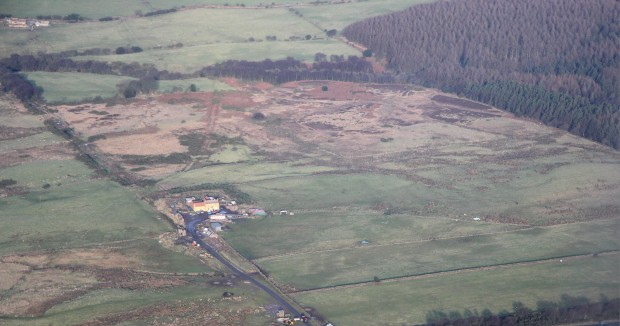 We undertook at topographic survey to record all of the surviving earthworks located on a small plot of rough pasture by the farmstead of Eden House, which is near the village of Hutton Mulgrave, on what was once part of Barnby Moor. The 4.66 hectare area of the cairnfield is statutorily protected as a Scheduled Monument, and as part of an ongoing management plan for it further detailed recording was needed. You can find a description of the monument here.

The survey was completed using a combination of photogrammetry and GPS survey. The photogrammetry was undertaken using photographs taken from a small UAV helicopter that were used to generate a metrically accurate model of the surface of the study area, including all surface features that were not obscured by vegetation. Some features were obscured, and so in addition a ground topographic survey was undertaken to record the more subtle features by GPS survey.

The survey presents a thorough record of all the archaeological structures and components identified in the form of a detailed measured plan, profiles across the putative deer park boundary, digital photography and an outline site gazetteer.

The large burial mound located within the cairnfield at Eden House 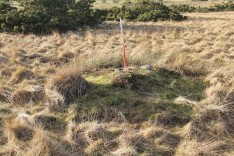 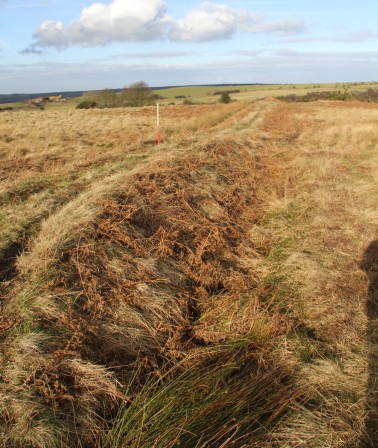 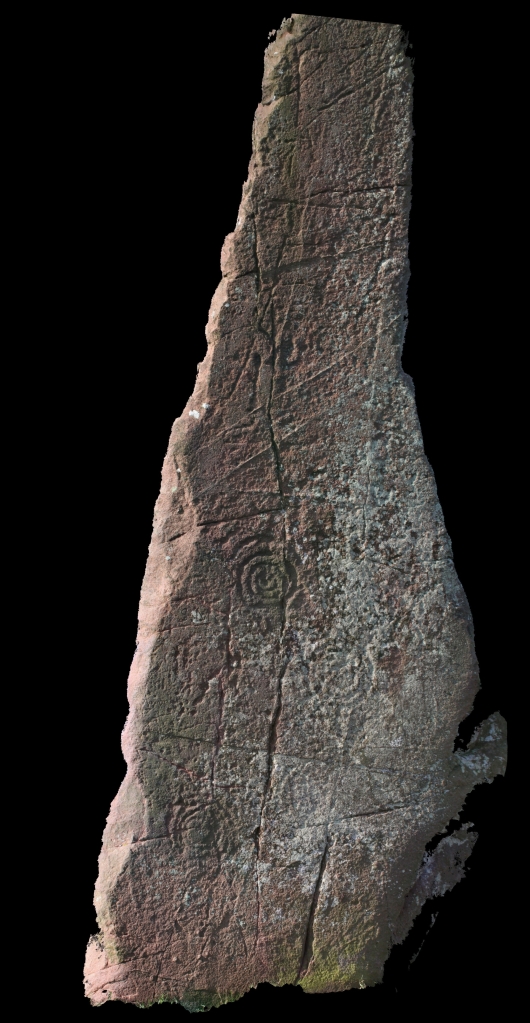 Long Meg and Her Daughters – 3D view of Long Meg

This post is concerned with the photogrammetric survey strand of survey that we undertook (see first post) as part of the Altogether Archaeology project at Long Meg and Her Daughters stone circle near Penrith, in the Eden Valley, Cumbria. 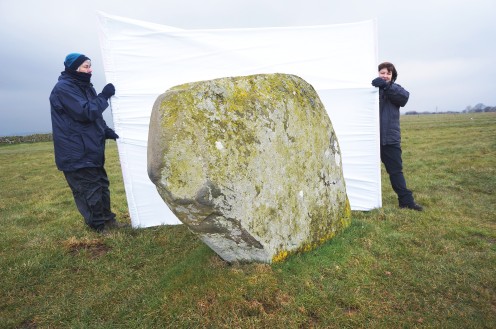 Long Meg and Her Daughters – photographic recording in action

Altogether Archaeology volunteers were instrumental in going through the various processes using Agisoft Photoscan Pro software to produce nine 3D models of individual stones from the circle. The software combined the photographs, computed the positions that the images were taken from, generated a 3D mesh, and then the photographs were reapplied to the 3D mesh as a texture.  Each individual photograph needed to be prepared, and this entailed masking out of any background detail still left in the photographs, and then the application of survey control. The end product was a series of 3D models that can be viewed as 2D plans or within Adobe Acrobat as 3D pdf files. 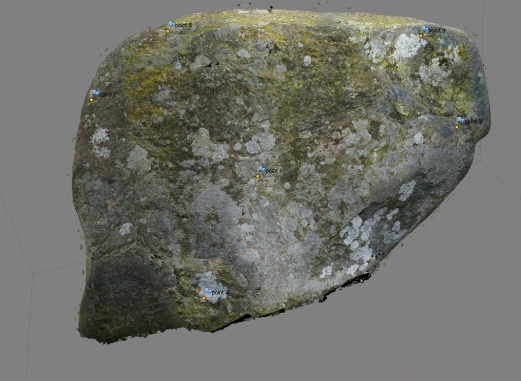 Long Meg and Her Daughters – 3D stone with control points

The photographs of the Long Meg red sandstone monolith came out particularly well as the bright sunlight slanted across the face of the stone containing the rock art motifs and gave sharp definition to the rock strata and any depressions in the surface.

Again many thanks must go to all of the Altogether Archaeology volunteers who braved the weather to take the photography on site, and to those luckier souls who were based in the nearby village hall processing the data.

Earlier in the year we were commissioned by Paul Frodsham of the North Pennines AONB under the guise of the Heritage Lottery funded Altogether Archaeology project to undertake two types of photogrammetric survey at Long Meg and Her Daughters stone circle located in the Eden Valley, near Penrith, Cumbria. This was part of a wider community project to develop an understanding of this exceptionally important monument and provide detailed surveys and geophysical investigation of the monument.

The work was undertaken in March 2013 and this post is concerned with the first part of our input into the investigation, which was producing a detailed aerial photographic plan of the site using a quadcopter UAV (Unmanned Aerial Vehicle).

Setting up the Quadcopter

This method uses aerial photographs taken from a small electrically powered model helicopter (UAV) which has the ability to carry a light weight camera and has the advantage that it can take photographs from much lower altitudes than can legally be achieved with a light aircraft. Survey control was introduced to the photographs by the placement of survey control targets across the site which were located by means of a survey grade GPS.The photogrammetric processing was undertaken using Agisoft software that provides detailed modelling using the overlap of up to 150 photographs, and creates a very detailed DTM (Digital Terrain Model) across the site. The photographs were then digitally draped over the model to create an accurate 3D model of the ground surface.

The primary output, however, was an accurate flat two dimensional image which can be used to generate accurate plans of surface archaeological features and contours across the extent of the site (at the top of the post). However, the 3D model can also be output as a tool to visualise the site from any perspective and can be viewed in more recent versions of Adobe Acrobat as a 3D pdf file.

Many thanks should go to all of the Altogether Archaeology volunteers who turned up in the cold weather to work on site during the project.